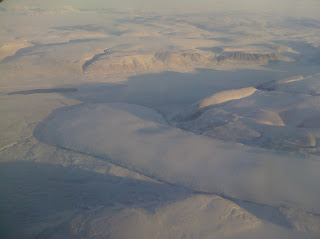 A glacier from the sky and from the land of glaciers: Greenland, or Gronland. They move a lot of rock and water and carve landscapes- if you blow the picture up you can see that the cliffs in the background have a reddish hue. This is the bedrock- I believe these rocks to be the un-metamorphosed meso-proterozoic sediments of the Thule Basin- they also contain volcanic/basic sills- i have pictures that i'm going to post. 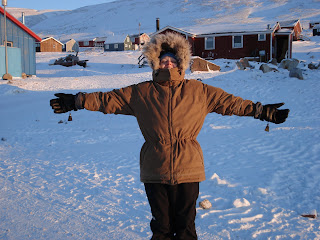 Ok, backing-up,,,i traveled to Greenland with Malin Jennings (here she is on the left-so very happy to be north of the arctic circle!!!) who has been studying the effects of climate change on the people, culture and environment of Northwest Greenland for the past 8 years. A dynamo of a woman who I have known since the 1960's. Please visit her website http://www.aujaqsuittuq.com/ to read first hand all the work she has been doing in this regard.

Getting back to the geology of northwest Greenland, the paper/image on the left was written in 2007 (??) and published by the Government of Greenland on 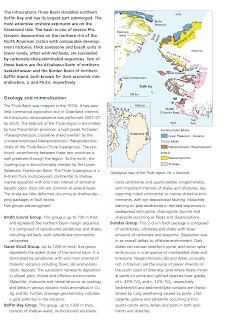 the Mineral Potential of the Thule Basin- Just to be clear- I am not a mineral or oil prospector- while these kinds of papers are written to document the potential for mining minerals, etc they are good resources for finding out what in the hell is going on with the geology in a place like northwest Greenland (or Virginia for that matter- many of the publications I rely on are from the Division of Mines and Minerals).

So, this group of rocks are part of the Thule Supergroup- the rocks exposed on the cliffs north of Qaanaaq (and in the picture from the sky at the top of the page)could be quite old- meso to neo- proterozoic-. 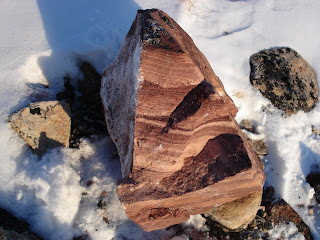 This quite a time range -1.6 billion to 520 million years ago-. I'm guessing that since these are not metamorphosed, they are not 1.6 Bya.....i just don't know yet. Anyway, here's a picture of a rock on the slopes above Qaanaaq; this rock is small- it's about 7 inches high (you can pick it up with one hand) but looking closely (blow it up) you can see the wavy boundaries between the layers of sand and silt- this SUGGESTS it was deposited in a near shore or inland flat environment- the red color MIGHT indicate us that enough oxygen was present to oxidate the available iron (Fe) thus imparting the reddish color. A red sandstone.....a beautiful specimen-The specimen is too small to really tell me much else- the wavy structure within the rock hints of aeolian (wind blown) origin- but I am waxing romantic and really just speculating. One would have to observe it in an outcrop to say anything other than it's a red sandstone that may have been deposited in a subaerial environment- There is some question regarding the red color- the rocks they were eroded from contained a large % of iron and it is possible to get a red sediments from a reducing environment-IF there is little in the way of organic material AND the parent rock was rich in Fe. There are geologists who study this stuff who know way more than me about environments of deposition- perhaps they'll read and comment !

The picture to the right 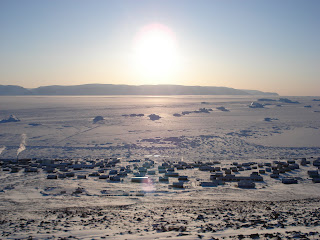 was taken by me in the vicinity of where the red rock lay- the view is to the south across the fjord (Murchison Sund)- the settlement at the base of the hill is Qaanaaq, the mountains in the foreground are about 26 KM in the distance. I have not figured out how to link my GoogleEarth placemarks into the blog, but if one is interested "where on earth" this place is type "Qaanaaq, Greenland" into your GoogleEarth thingy. 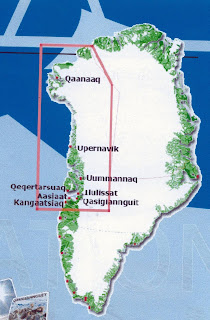 On the left is map of Greenland (thanks to Destination AVANNA)- and you can see Qaanaaq (the most northerly palindrome in world) in upper left portion of the figure.

The picture of two beautiful Thule women. were taken of a photograph within the museum at Qaanaaq which may have been taken by Peary during his stay at Thule (Qaanaaq)-perhaps in the 1890's. To this day there are residents of Qaanaaq with the last names of Peary and Henson (Peary's able right-hand man). 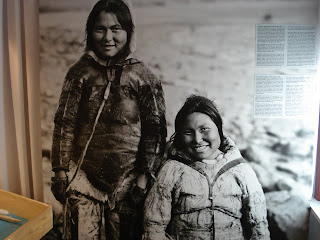 I think I am safe to say that the rock pictured above is from the lower part of the Qaanaaq Formation (one would not have to be a geologist to come to this conclusion, eh?) - a fining upward sequence of deposits containing crossbedding and ripple marks and encompassing alluvial plane to marine shorline (braid plane to tidal) environments- like the one shown here (stolen and used without permission from the brilliant professor of geology at James Madison University, Lynn Fichter). In this particular case we are focused on the near shore environments (towards the left side of the diagram) 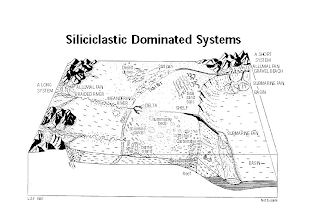 I read a paper last night that puts the age of these sediments in the neighborhood of 946 million years ago (MYA)....that is old ! The unit itself includes grey siltstones and carbonates in the upper portions- i found a few specimens of each. What is enjoyable is the story the rocks tell. The climate and environment (and location) were entirely different then what it is now. Just explode that graphic and look at the model of deposition !!
Posted by True North at 8:39 AM