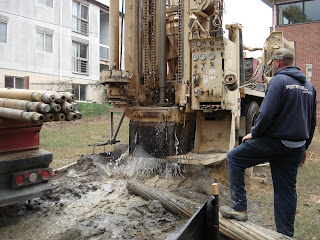 If you (or someone you love) are considering drilling a well for irrigation, please save yourself some money and collect some empirical information about your water supply. The only way to understand it, is to conduct some kind of "stress", "aquifer", or "pump" test on the water supply. There are number of sound reasons to conduct some kind of test on the well. But the number one reason I tell my clients is that it protects their investment.

Why spend $10K to $20K on a well, pump, piping and irrigation system to find out later that your 100 gpm well is really a 10 gpm well. The water is "the dog that wags the tail" for the entire enterprise; yet, I am amazed at the number of intelligent people who ignore the need to collect at least some minimum data regarding the capabilities of the aquifer beneath their feet. 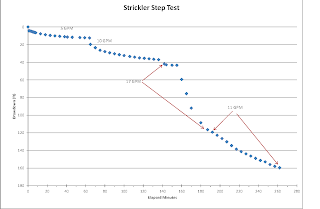 We first conducted a "STEP" test on the well. A STEP test is a "pre-test" for the main pumping event and is conducted to determine a pumping value for a longer period pump test. You start pumping the well at low rate- measure the drawdown and "STEP" it up after it appears it will hold. Here on the right is the graph of time vs drawdown for STEP test on this well. In this case we started at 5 gpm. This is a semi-log plot and it is clear that the well could handle 5 gpm (at least for awhile). So, we "stepped" up to 10 gpm. And the curve began to adopt an asymptotic shape. All good. Then we jumped it to 17 gpm. And lookie there!! It held steady at around 50 feet then the "angle" got a "little" steep. So steep that we needed to slow down!!! WHoaaaa Nelly!! So, we stepped back to 11 gpm and called it good for the day. 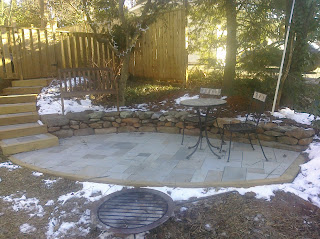 So, we allowed the well to rest from this activity and went back to work on the Alberene Soapstone patio in my yard (here on the right). This soapstone is a Proterozoic-age ultra mafic rock that was recrystallized by metamorphic processes. These emplacement "pods" make up a portion of the Lynchburg Group of rocks in central Virginia. Anyway, we went to quarry and bought several truckloads of scrap ($75/load)-hauled them back home and cut them with a wet saw that belongs to Terry Waggener (seen in previous post). He is a lengendary stone mason who knows more about geology than most graduate students (certainly more than me). The retaining wall in the background was made from precambrian-age granite gneisses, cambrian-age catoctin greenstones and the base layer were rocks from the arkosic sandstone/quartzites of the Lynchburg group (similar age as the soapstone).

Back to the test: we 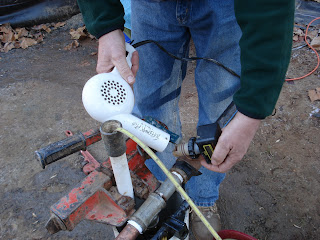 returned to the property to conduct a limited withdrawal of the well only to find everything frozen up and had to spend several hours unthawing the pipes.
Posted by True North at 8:54 AM