Environment of Deposition- at the base of the Blue Ridge Mountains

I am currently working on an academic (or "geologic") problem at the base of the Blue Ridge Mountains in Rappahannock County, Virginia. I'll be working with Dr. Scott Eaton from JMU. The site is located on an "upland flat" on Route 231 between the Hazel River on the north and Hawlin Road on the south. Locally, this portion of Rappahannock County is known as F.T. Valley- named after Francis Thornton who owned a whole lot of real estate beginning sometime during the 18th century. He also owned the toll road crossing the Blue Ridge Mountains at Thornton Gap (see Figure below). While I couldn't find a lot of information about him, I found this Wikipedia Link about Thornton Gap which gives some information 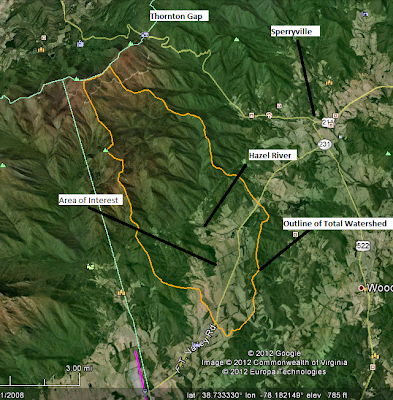 This is unusual, but not unheard of, terrain in the eastern Blue Ridge Province of Virginia. There are several other similar areas close by: Banco/Criglersville, Etlan/Nethers, Sperryville and Gid Brown Hollow (near RT 211)- to mention a few.

The slope of the land in this particular area is approximately 2% (or less). I find that very interesting given the surrounding rolling and steep terrain that makes up this portion of the the Blue Ridge physiographic region. I suspect the flatness may be due several factors: perhaps erosion (not intuitively pleasing) or simply the uniform weathering of the bedrock (maybe); regardless, I want to find out (if possible) why it is flat. Is it coincidence that this upland flat is the "platform" for deposits of debris from the flanks of the Blue Ridge or are some thers factors at work?

Additionally, there are several (or more) terrace deposits on this platform/upland flat. I want to know what their relative ages and under what conditions they were deposited. Geologist now know that catastrophic rainfall events occur on a somewhat regular basis in the Appalachians and are responsible for many landscape forms (geo-morphology). 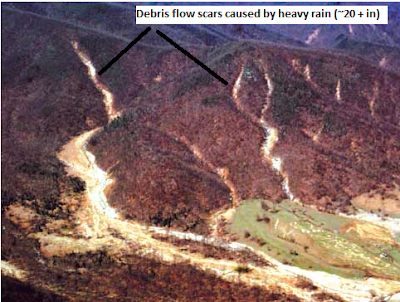 The photo above was taken in western Madison County, Virginia after the catastrophic (>30 inches in 16 hrs)rainfalls during June of 1995. Here is a link to Scott Eaton's paper on the Madison County floods of 1995.

Perhaps we may be able to determine how many episodes occurred here by studying the soils and their relative elevation with the Hazel River and to each other. Obtaining this information may help in predicting periodicity for this particular watershed and similar ones on the Blue Ridge.
Posted by True North at 1:20 PM